She was the only hope that country has. Extremists have already killed over 130 people in trying to kill her. They were third time lucky as the saying goes. Shot in the head and neck, before being blown up by the gunman's suicide belt. I guess that's the simplest way of getting radical clerics or some sort of extreme faction into power. You just blow up all the opposition. It's a big shame. She was on question time (a popular UK TV politics show) around February time last year.
http://news.bbc.co.uk/1/hi/world/south_asia/7161590.stm
War does not determine who is right, war determines who is left.
Top

I don't know. There's just no helping some people. I don't really know what else to say to be honest. 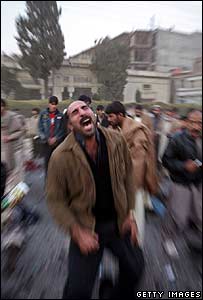 They are more extreme in showing emotions over there anywhere. I was always brought up to never cry as a man. It was always to be avoided. I never experienced family passing away, but pets were as close as I got to that. I always tried to cry alone. However, that is my culture and there is nothing in wrong about wailing in public to be honest.
That aside I think he may have lost a friend or family member as he was shown in another picture kneeling in the road by a body. About 17 odd people were killed at the scene and he may also be in shock.
War does not determine who is right, war determines who is left.
Top

Some interesting views expressed on the BBC Have Your Say. I always click the reader recommended and most of the time it provides the best summaries of a particular topic. The first 1 and 2 pages here was interesting reading.
http://newsforums.bbc.co.uk/nol/thread. ... #paginator
War does not determine who is right, war determines who is left.
Top

Barry took the occasion to express his “deep appreciation for the Islamic faith, which has done so much over the centuries to shape the world, including my own country.” Barack H. Obama’s biological father and stepfather were both Muslims.
Last edited by appleton on Thu Jun 18, 2009 6:39 pm, edited 1 time in total.
Top

3 posts and advertising your site in all of them. Not a good start wouldn't you agree?

Peace
"Practical men who believe themselves to be quite exempt from any intellectual influence, are usually the slaves of some defunct economist. Madmen in authority, who hear voices in the air, are distilling their frenzy from some academic scribbler of a few years back" - John Maynard Keynes
Top

This is possible. Dawn, 19 May 2009, carries the story (on its back page). There is also much stuff on the Internet, again courtesy of Seymour Hersh. If true, the man who would have run the operation would be Lt. Gen. McChrystal, who recently took over the USFOR-A/ISAF command in Afghanistan, vice Gen. McKiernan, sacked by Defence Secretary Gates. McChrystal, who has a controversial past, is now in charge of all special ops in Pakistan, and Afghanistan.
Top
Post Reply
7 posts • Page 1 of 1